Leaside Manor Suites & Executive Apartments is a collection of properties: Leaside Manor,  Midstream Manor, Westmount Manor and Airport Manor. The bulk of our properties reside on over 2.5 acres of mature trees and gardens in the Waterford valley area at the west end of St. John’s. Many of the estates in the area can trace their histories to the early 20th century, when many of the city’s merchant class families constructed their homes.

One of our main anchor properties, Leaside Manor was constructed in 1921 by John J. Parker, of legendary Parker & Monroe local footwear retail chain, and his new wife Flora. The couple named the property ‘The Lea’ meaning ‘meadow.’ The style of the house is unique for Newfoundland, inspired by the Scottish homestead of the Doulton family, of Royal Doulton fame, near where Flora spent her formative years in Kilmacolm, Scotland. The house’s exterior maintains much of its original construction: Tudor styling; cedar siding; unique stylized roof lines; colonial columns; lead-lined windows; double, beveled, plate glass doors at the entranceway; expansive lot with sweeping walkway; heavily treed lot; wrought iron fencing and double-gated drive. The property’s interior is influenced by the Arts and Craft movement of the early 20th century with its beamed ceilings, paneled walls, parquet wood floor, light sconces, ornate fireplaces, and inlaid wood flooring.

As proud as they are of their properties, present owners Dion and Dora Finlay know it is more than bricks and mortar that placed Leaside at the top of its field – it’s the experience. Leaside Suites & Executive Apartments is renowned for combining glorious properties and rich, contemporary décor with an unmatched level of personal service that has been recognized by TripAdvisor as the best in the city.

Dion and Dora are understandably pleased. “Most visitors talk about how nice the experience was first – then they mention how pretty everything is. For us, it’s the best of all worlds.” 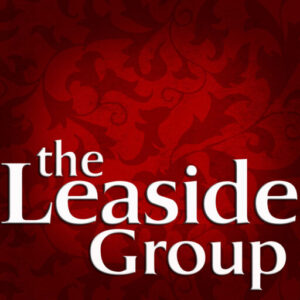